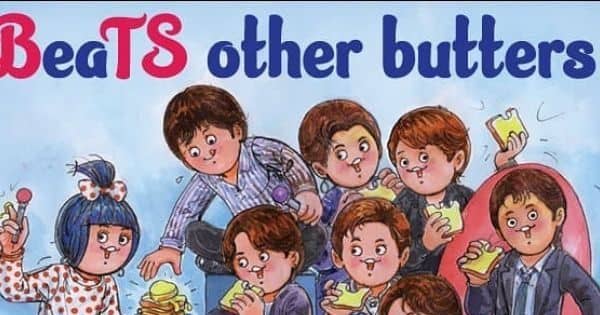 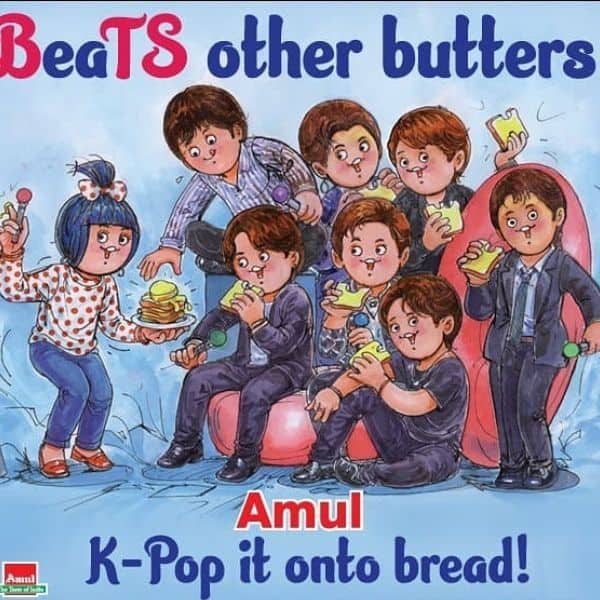 Amul Butter India has always released their special tropical edition paying tribute to the soldiers, legendary icons, frontline workers, and others. Now, fans had been eagerly waiting for them to release a special topical dedicated to the Grammy-nominated South Korean group BTS. And they have done it! Yes, BTS had recently announced their second English single Butter on May 21. The song is a dance pop track that promises to cater the smooth yet charismatic charm that the group is loved for. The band kept their viewers engaged for over an hour to announce the new single through YouTube live stream. Hence, Amul Butter India has released new caricatures to depict the topic. The new topical has the septet RM, Jin, Suga, J-Hope, Jimin, V and Jungkook, receiving bread and butter from the Amul girl herself. The caption reads, “#Amul Topical: Korean band announces single ‘Butter’!” The tagline on the caricature says “Beats other butter” and “K-pop it onto bread”. Also Read – BTS: Suga slays in an all-black look for a new commercial – view pics

Whoa! This is just so amazing. BTS ARMY have been waiting for this since they announced their single, Butter. The band recently unveiled the logo of their new single, Butter. It was not just a normal unveil. They had an hour-long video and it showed an animated butter melting. You can hear kitchen noises in the video. The video has got more than 12.9 million views so far on YouTube. BTS, or Bangtan Sonyeondan (meaning Beyond The Scene), have gone onto become global icons since their debut in June 2013. Seven-member superband BTS was the most streamed Korean artiste and global group last year, according to streaming giant Spotify. Spotify’s data showed that the top 10 most streamed Korean artistes logged a combined 10.6 billion streams in a sign of their growing clout around the world. Also Read – Billboard Music Awards 2021: The Weeknd rules the nominations with 16 nods, followed by DaBaby, BTS and others