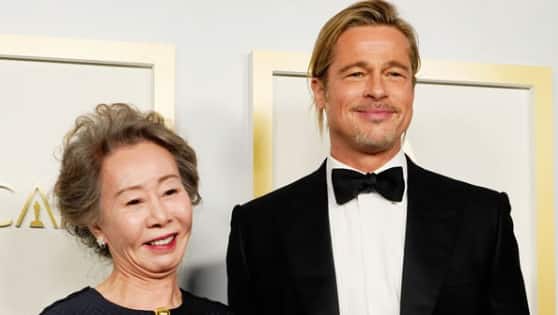 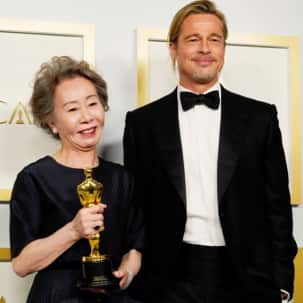 Though the Oscars 2021 have been low-key due to the pandemic, the excitement amongst cinema lovers was still the same. After all, some brilliant films and performers were competing amongst one another. The big winners of the night are Nomadland, Chloe Zhao for Best Director, Frances McDormand, Anthony Hopkins, Soul amongst others. Though the ceremony was downsized keeping in mind the restrictions set by the pandemic, some moments shown through. Let us take a look… Also Read – Oscars 2021 Full Winners List: Chloe Zhao, Nomadland, Daniel Kaluuya, Soul emerge as the big victors

Yuh-Jung Youn flirting with Brad Pitt
The Korean actress who is 73 became the first woman from her country to win an Oscar. She played the role of Soon-ja in the film, Minari which talks about Korean immigrants in Arkansas in the 1970s. When on stage, Yuh-Jung began flirting with Brad Pitt. She told him it was nice to meet him, and where was he when they were filming the movie. She said, “Tonight I have just a little bit of luck, I think. I’m luckier than you. And also, maybe it’s the American hospitality for the Korean actor. I’m not sure.” She thanked her sons for letting her work at her age. Also Read – Oscars 2021: When and where to watch the 93rd Academy Awards and other deeets

Another Round’s Thomas Vinterberg remembers late daughter
The Danish film, Another Round won the Best International Feature Film. The maker, Thomas Vinterberg remembered his daughter, Ida who died in a car crash four days before they began filming for the movie. He got emotional as he remembered her. He said, “She was supposed to be in this and if anyone dares to believe that she’s here with us somehow, you’d be able to see her clapping and cheering with us. We ended up making this movie for her — as her monument. So, Ida, this is a miracle that just happen, and you’re a part of this miracle — maybe even pulling some strings somewhere. But this one is for you.” Also Read – Priyanka Chopra’s savage retort to a journalist slamming her and Nick Jonas for hosting Oscars 2021 nominations is winning hearts

Mia Neal’s stirring speech after being first black woman for win for Best Makeup/Hairstyle for Ma Rainey’s Black Bottom
Jamika Wilson and Mia Neal became the first Black women for win in this category. In a moving speech, Neal said she hoped that equality would be normal one day and not path-breaking. Remembering her grandfather, James Holland, Neal said, “So I wanted to say thank you to our ancestors who put the work in, were denied, but never gave up. And I also stand here as Jamika and I break this glass ceiling with so much excitement for the future. Because I can picture Black trans women standing up here, and Asian sisters, and our Latina sisters, and Indigenous women. And I know that one day it won’t be unusual or groundbreaking it will just be normal.”

Chloe Zhao’s speech after Best Director win for Nomadland
The low-budget Nomadland has picked three big awards, Best Picture, Best Director and Best Actress for Frances McDormand. The Chinese filmmaker was seen on the red carpet in a Hermes dress, sneakers and no makeup. In her speech, she said, “People at birth are inherently good.’ Those six letters had such a great impact on me when I was a kid, and I still truly believe them today. Even though sometimes it might seem like the opposite is true, I have always found goodness in the people I met, everywhere I went in the world. So this is for anyone who had the faith, and the courage to hold on to the goodness in themselves, and to hold on to the goodness in each other, no matter how difficult is to do that.”

The lady who is 74 gave us the funny moment as she twerked at the event. She was nominated in the Best Supporting Actress category.<

Well, these moments made the day for fans of the ceremony!

Date, time, where and how to watch the group’s virtual event...