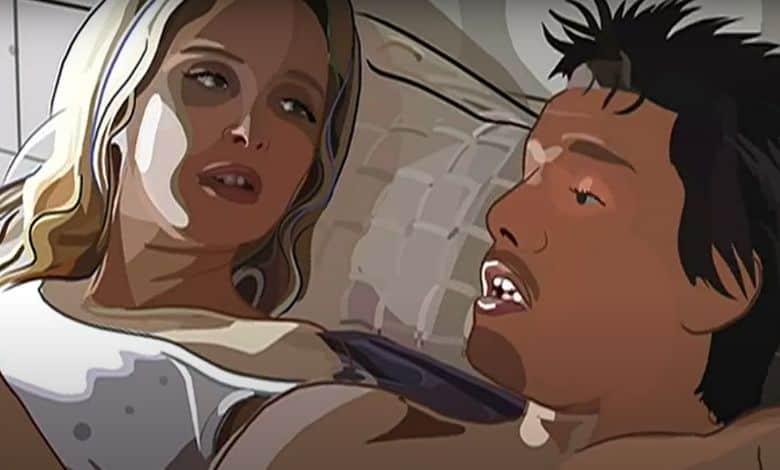 Movies allow us to live vicariously through others, act as voyeurs and witness things we’d never see in real life.

Richard Linklater’s “Waking Life” lets us eavesdrop on great conversation and live in the mindscape of someone’s dreams.

Linklater’s 2001 film is a sublime, one-of-a-kind experience. Here’s an animated film that was created by computer artists, drawing over every frame of this traditionally shot work, except each sequence bears a different visual approach, as every artist applied a different style for each scene. The result is better seen than described, as the only word that exists in the English language to describe how this appears is “trippy.”

In the opening scene, a little girl (Lorelei Linklater, the director’s daughter, who later had a major supporting role in his “Boyhood”) is playing with a paper fortune teller.

When I was in grade school, we called them “cootie catchers,” but never mind.

We watch as the flaps of the paper go up and down, as she asks her young friend to “pick one,” to which he chooses a corner that unveils the phrase, “Dream is Destiny.”

If that wasn’t odd enough, we see the same little boy taking a night walk in the next scene, in which gravity seems to reverse and he suddenly floats away into the night sky like a helium balloon. The title credit appears and we’re off.

Next, we see a string orchestra tuning up and practicing (according to promotional notes, this is actually a glimpse of the musicians scoring the movie getting warmed up). We’re then introduced to Wiley Wiggins, one of the stand-out actors from “Dazed and Confused.”

Wiggins doesn’t seem to be playing a character, as his conversations are less about building an arch for his role and more just trying to understand the reality of each scene. Wiggins is the film’s central figure but he’s not so much the protagonist as a tour guide through his own subconscious.

Apparently, we’re in his dream state, and every changing scene is another level of his unconscious, self-revealing another layer of his mind and thought process. It’s a bold concept for a movie and one that this one, a real masterpiece from Linklater, is able to live up to scene after scene. The animation here isn’t merely “trippy” but transporting, and unlike anything seen in the mainstream at the time of release.

How to describe the look of animation? It depends on the scene. Sometimes the humans have a painterly beauty and vividness, sometimes they squiggle like living Picasso figures, or resemble living comic book figures.

The animation both captures the nuance of the performer and adds to the texture of their monolog or, in some cases, wipes away the details of their faces and creates moving art.

Each digital artist is interpreting the imagery differently, giving the topics discussed their own distinct visual approach. A conversation about language makes examples of words float behind the speaker. Another scene gives us a dizzying walk through a vast corridor, as the structures are presented as wavy.

Sometimes the animation interprets the individuals doing the talking as kooky and blurry figures with liquid movements, as though we were sitting alongside Alice at the Mad Hatter’s table.

Watching this film is a delight but listening to it is equally as magical. Some of these monologs sound written, while others seem made up on the spot. Most of this is contemplative, sharply written and even sweet, though we also listen to some angry rants.

It’s so devoid of mainstream formula structuring of any kind but dialog and character-driven and interested in thoughtful patter over narrative momentum, that this could only be categorized as a Richard Linklater film.

Linklater had this and “Tape” come out the same year. His willingness to stick his neck out on brazen experiments like this is inspiring. At the time, only Mike Figgis was attempting to expand the possibilities of cinema to this extent.

Has there ever been a film that better visualizes what our dreams look like? Not just the clever interpretations that the animators give each assigned sequence but how the tangible becomes wobbly, the concrete details become shaky and what is absolute keeps changing from moment to moment. Even Luis Bunuel never got this close to replicating what the innermost spaces of our dreams look like to the dreamer.

A mini-“Before Sunrise” sequel exists within this, which, I suppose, is not cannon to the “Before” trilogy, since it exists outside of the chronology in between the first two films.

Or maybe this is a scene of the events described in “Before Midnight,” regarding what happened after “Before Sunset.” It’s a possibility, since Linklater tends to think ahead and sidestep the linear. After all, he made “Boyhood,” in which a narrative end goal becomes a waiting game and creative exercise that spanned decades.

However you view the surprise cameos, it’s a wonderful little revisit with Jesse and Celeste, who Ethan Hawke and Julie Delpy always invest with passion and lived-in vitality.

“Waking Life” is a film in love with the questions and conversations of existence, as well as the joys and possibilities of life itself. It has a youthful feel, or maybe I’m just seeing myself as I watch it. I caught “Waking Life” when I was in my 20s, on a date with a lovely young actress who, like myself, was into the mental gymnastics and cool vibes the film emitted.

Linklater’s “A Scanner Darkly” (2006), his animated Phillip K. Dick adaptation is, perhaps, the better film, as it showcases animation that is consistent in style from start to finish, whereas in “Waking Life,” each scene looks different because the animators are different.

Nevertheless, while “A Scanner Darkly” (which is the best film of 2006) appears more self-contained in the way the animation enhances a far more clear cut (if still complex) narrative, “Waking Life,” as the more experimental work, is not just a perfect companion to Linklater’s debut film, “Slacker.” It’s a master class on the human struggle to utilize philosophical thinking to pin down just what life, real and imagined, truly is.

How ‘The Phantom’ Beat the Odds and Became a Cult Favorite