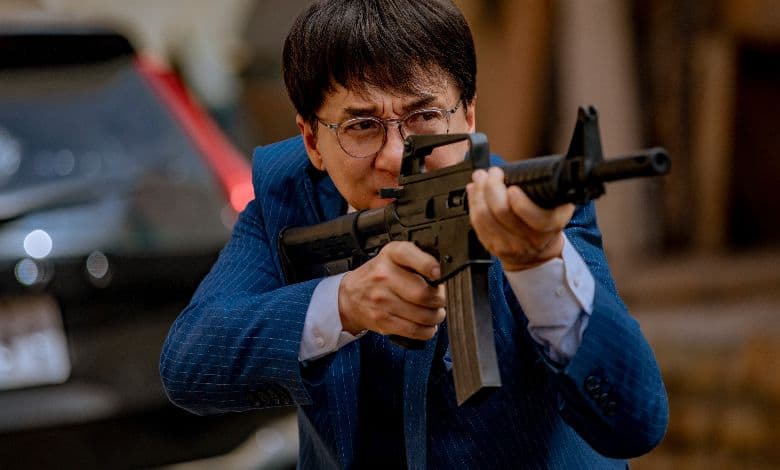 Jackie Chan and Liam Neeson have something in common.

Both stars vowed to give up the action heroics as they entered their 60s. Neither one has stuck to the plan.

Chan’s latest, “Vanguard,” finds the action superstar taking baby steps toward his promise. He’s surrounded himself with youthful co-stars who do most of the heavy on-set lifting.

That means Chan doesn’t risk his life replicating his previous feats. He’d be better off finding collaborators who know how real people talk, though.

“Vanguard” sports some of the worst dialogue ever uttered in an action film, and that’s saying something. A little less pandering to Mother China wouldn’t hurt, either.

Huating and his associates rush to protect Quin from the group’s clutches. The mission includes a detour to “Africa” where Quin’s daughter, Fareeda (Xu Ruohan), protects the local wildlife.

It’s an excuse to trot out the worst CGI seen since the early ‘90s, one of many creative landmines “Vanguard” trips along the way.

You can sense the film’s creators aping the “Fast & Furious” template, but they get few of the crucial details right. Everyone, including Chan’s character, is too bland to connect.

Say what you will about a franchise that ignores the laws of physics … the “Furious” movies teem with larger-than-life personalities.

Oh, could “Vanguard” use a dash of Chris “Ludacris” Bridges, for example.

The moments between action set pieces are excruciating, the dialogue sounding like randomly generated banter by your kitchen’s Alexa. Even the villains leave little impact, making the stakes impossibly low.

We’re treated to copious Chinese propaganda during the globe trotting, including New Year’s Day revelry on steroids. We’re even told Captain China could totally beat up Captain America. None of this would register without the context of the Hollywood-China connection, or the fact that the story doesn’t win us over.

Chan and “Vanguard” director Stanley Tong once teamed for such memorable movies as “Supercop” and “Rumble in the Bronx,” Chan’s successful bid for stateside glory. That history hardly translates here. Chan is often relegated to a supporting player while his younger co-stars glom the screen time.

That may be wise on Chan’s behalf.

The stuffy subplots and humiliating dialogue could bring Laurence Olivier to his artistic knees, let alone an actor known for his fists, not his delicate line readings. As is, Chan floats in and out of the story, occasionally fighting on Vanguard’s behalf. There’s nothing embarrassing about him here. He’s not reinventing his old moves, but he careens around an action sequence like a man 20 years his junior.

The film wisely leans on his deadpan delivery, as ageless as his visage. Too bad the ensuing laughs are tiny at best.

FAST FACT: Jackie Chan got a toe hold in action movies by working as a stunt man in Bruce Lee’s 1972 classic “Fist of Fury.” His physical prowess impressed both Lee and the crew, setting the stage for his future career.

A few individual stunts sparkle, and some larger, isolated beats suggest the thriller that “Vanguard” never fully embraces. The team behind the movie, bless their hearts, understands we’re here for the action, not the emotional detours, so they deliver as much of the former as possible.

Vin Diesel would rather change a flat tire than do that.

An early “Vanguard” fight sequence, set in a restaurant’s kitchen, showcases martial artistry at his low-fi best. Far less impressive? The introduction of an Africa-based killer whose comeuppance is neither sensible nor comic.

Chan is the obvious draw in “Vanguard,” but some of the time he just looks bored. Acting can only cover up so much, right?

HiT or Miss: Starved for new Jackie Chan heroics? “Vanguard” provides a few morsels of just that, but little else.