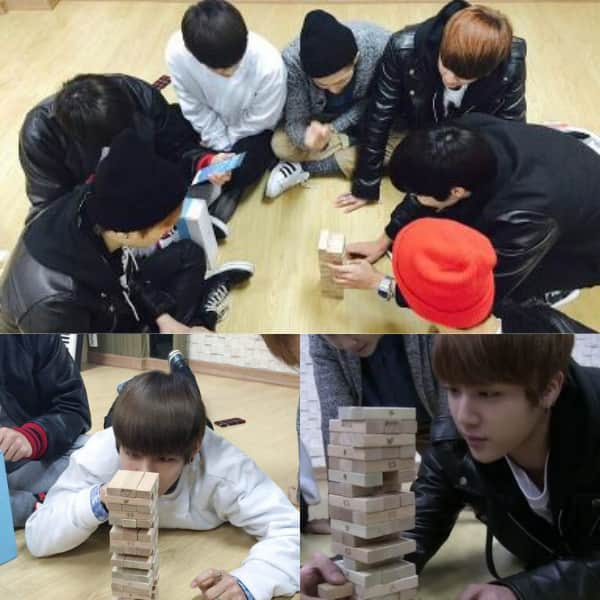 BTS sure knows how to have fun. The boys are pretty close to one another and indulge in fun and games with each other. We came across a video wherein we saw the septet playing Jenga. The video is super-duper fun to watch and hence we thought of sharing the same with y’all. From Kim Seokjin aka Jin and Jungkook aka Jeon Jungkook being masters at Jenga to seeing Kim Namjoon aka RM and others trying their best to not fail while at the game, the excitement was just at a peak. And seeing them play Jenga now makes us want to play Jenga. Also Read – BTS now has 4 slots in Billboard’s World Albums top 5 chart – read deets

BTS boys J-Hope, Suga and RM were pretty conscious while playing Jenga, but it was the ease of Jin that put others in a little tough spot. RM, J-Hope and Suga were being extra careful as the maknae line, that is, Jungkook, Jimin and Taehyung were watching them. Being the hyungs, they had a rep to maintain in front of the younger members. However, they did not let the fear of making Jenga fall get hold of them and played slowly. Once they took out a block, they would celebrate as though they won a lottery. Also Read – BTS: Jeon Jungkook looks like a prince from a vampire fantasy in these campaign shots – view pics

Twitter Korea had given the challenge to the boys. And mind you, it also had punishments in place if you made it fall. And it did fell. Taehyung was the first one to make it fall. He was a little too nervous the first time and brought it down. The punishment for the same was to buy snacks for everyone. Aww. Such a sweet punishment. However, soon, V picked up the game and made no mistakes. Jin was the master though and after him, it was the maknae aka Jungkook who was ruling it during the challenge. While playing the game, the boys were giving background music depending on the situation. For example, when the block was stuck they would give a piece of tense background music or a funny one. It was so much fun to watch BTS play Jenga. Here, without much ado, watch the video below: Also Read – BTS: Jungkook just CANNOT say no to his hyungs – watch the cutest video compilation ever

Can you guess who among RM, V, Jin, Jungkook, Jimin, J-Hope and Suga has the most lines in their chartbuster song, Dynamite?