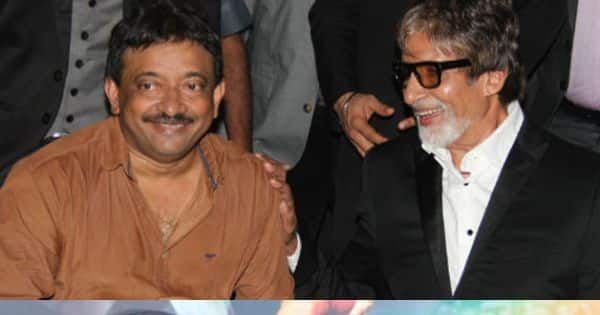 Maverick filmmaker Ram Gopal Varma’s next gangster movie, D Company, is about to release soon. It’s RGV’s forte and whenever he comes with a crime film, it’s always exciting, given what he has already in the genre with films like Satya, Company and Sarkar. Now while two of those movies had starred big names like Ajay Devgn and Amitabh Bachchan, D Company features a cast of relatively unknowns much like how Satya had back in 1998, way before Manoj Bajpayee turned into the A-lister that he’s today. So, BollywoodLife decided to quiz Ram Gopal Varma about this in an exclusive interview, and to our pleasant surprise, not only did he he reveal his reasoning behind his casting choices, but also ended up divulging how he would wait in queues for hours on end prior to turning into a popular filmmakers, just to catch a glimpse of his two favourite stars of all time, Amitabh Bachchan and Sridevi. Also Read – Abhishek Bachchan recalls his first meeting with Aishwarya Rai as a ‘production boy’, and how Bobby Deol inadvertently played cupid

Reasoning why he doesn’t always cast stars in his movies, Ram Gopal Varma said, “When casting, the most important thing one needs to keep in mind is the believability of the character. Dawood Ibrahim was a man who at the age of 25 was almost like behind his brother, he never, upfront, pushed himself. Slowly, over the course of time, he developed that (taking centerstage and making his own decision). So, I have to keep that emotion in mind while looking at these factors during the casting process. Now, though he’s not 25, Ajay Devgn for me as an actor may be so powerful that to underplay this character would look very stupid in the film because the audience would want to see his very first shot with excitement — that’s the image he’s developed over the years, that’s what is called a star.” Also Read – Adipurush trends on Twitter after Prabhas and Kriti Sanon fans are left disappointed by the team on Ram Navami — deets inside

Continuing in how he tries to stay away from the star system as much as possible and disclosing how Amitabh Bachchan and Sridevi were the only two stars (superstars, to be honest) he’s always been enamoured with, Ramu added, “When I had made Company, Ajay Devgn was not a big star so it worked, but after Singham and all those films, if you put Ajay Devgn into such a subdued role like Company, I don’t think it’d ever work. So, I take that into consideration, especially for genre films. Of course, you might get a bigger audience with stars, but that’d be at the expense of not being honest to the film. The point is, I was never attracted to the star system becasue of the kind of cinema I’ve made be it Shiva or Raat, (from the beginning) I’ve always wanted to see characters in films rather than known faces. Amitabh Bachchan and Sridevi are the only two people I’ve had a fascination for as stars and the reason for that is I saw them when I was a nobody, I would stand in lines (for hours) to buy tickets and would see them.” Also Read – Trending Entertainment News Today: Nysa Devgn turns 18, Hina Khan’s dad passes away, Sajid Khan in legal trouble

Well, Ram Gopal Varma saying it like he feels as always.

Also, remember, the BollywoodLife.Com Awards 2021 are back in full swing, and Voting is Now Open in all categories! So, Click Here to Vote for Your Favourites and Stand a Chance to WIN Exciting Prizes.

The Sandeep Aur Pinky Faraar director reflects on the evolution of rape in Bollywood; says, ‘Rape scenes were used as tropes to titillate the...

Enjoyed the Friends Reunion? How about a Hum Paanch reunion then? Vidya Balan aka Radhika answers [EXCLUSIVE VIDEO]

Anil Sharma reveals he wants to go ahead with Gadar 2; says, ‘People would want to see 10 films with Sunny Deol’s character’ [EXCLUSIVE]

Rana Daggubati gets nostalgic about the festival of colours

Bobby Deol opens up on his Love Hostel look and release