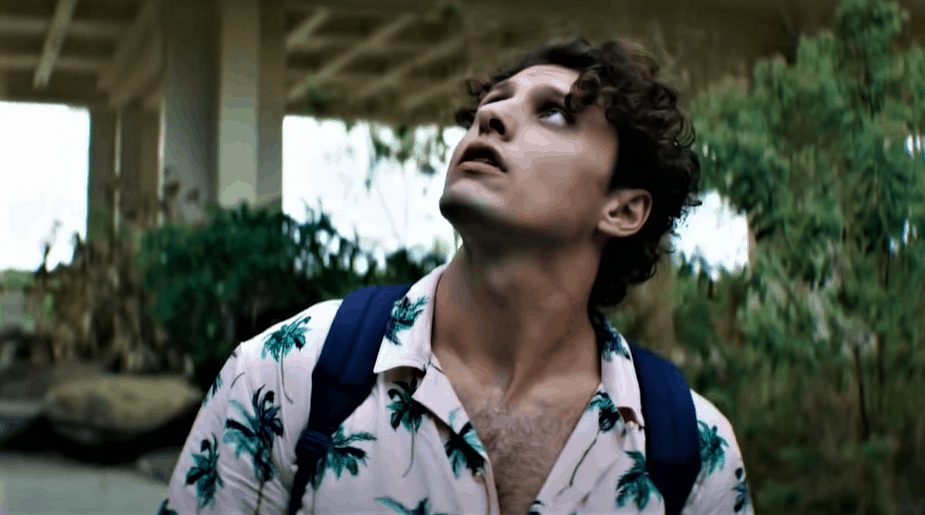 Four attractive young people (Michelle Randolph, Bianca Haase, Brock O’Hurn and Michael Vlamis) decide to treat the special birthday girl among them and spring for a vacation on Maui in “The Resort.”.

Better still, they plan to island hop and stay overnight at a supposedly haunted and abandoned resort, known for appearances of “The Half-Faced Girl” and bad things that occur in “Room 306.”

The whole thing is presented with a framing device, in which the sole survivor (no telling who — wait, you won’t care) recalls the whole thing to a cop and we keep flashing back to the terrible six hours she spent on the island.

Here’s the problem with the flashback: it takes place in a hospital room with a single curtain, a window, a bed that lacks any beeping noises, a skeleton that wouldn’t be out of place in a high school Science class and nothing else.

To give writer/director Taylor Chien’s “The Resort” some credit: it does have a great movie poster. Nothing like a bloodied “DO NOT DISTURB” sign to drive home the concept.

As for the film itself, it tries but cannot overcome its shortcomings. Six minutes in and I couldn’t wait for these teens to die — the actors are doing their best, but the dialog is dreadful. Here are some choice samples:

(courtesy of the dumb blonde) “If there’s a God, there has to be an evil.” I think she meant to say “Devil” and they just kept the flubbed take, but who knows.

(at the mention of Pearl Harbor on Oahu) “Pearl Harbor? I am a huge Michael Bay fan!”

Finally, someone says during a tense moment, “This is the part of the scary movie that seriously pisses me off!” I know how he felt.

Yep, these teens are the worst. The movie is as bubble headed as the characters.

As luck would have it, this is the second low-budget Hawaii-set horror film in two years, with last year’s wretched and far more excruciating “The Unfamiliar” landing with a thud.

Is this now a new sub-genre we must endure on an annual basis? Whereas “The Unfamiliar” was especially hideous in the way it literally demonized Hawaiian spirituality and exuded a contempt for the culture (on top of being a rotten horror movie), “The Resort” is less offensive, though there are vaguely condescending references to “the locals,” who are never seen.

The end credits list Twin Falls as a location utilized, which at least suggests the cast and crew likely had a good time making this.

There are shades of “The Blair Witch Project,” “The Shining” and “The Evil Dead” in the story, but not enough to elevate this above the D-list. If it sounds like I’m being hard on this, keep in mind that it runs a whopping 75-minutes (!) and they save the spooky stuff for the last ten.

The characters are so obnoxious (particularly Vlamis’ insufferable and very-drunk Max), this comes across as a near parody. Had the production decided to make this a send-up of low-budget slasher movies, it might have worked.

Instead, the film’s biggest legacy will likely be audiences getting the title confused with last year’s “The Rental” and “The Beach House” (which are both better films but still not very good).

Chien, who also co-directed a short film called “Doody Pants,” has a feel for the supernatural bits in the climax (including the nutty final reveal) but this isn’t a good movie, not even with majorly lowered expectations. I think Chien has a good horror movie in him and hope he uses this opportunity to learn and hit a home run the next time.

There’s some not-bad CGI and make-up effects and Chien utilizes the natural beauty and locations he secured. On the other hand, the camera ogles the cast in a manner unseen since “Girls Gone Wild,” a truly dubious touch.

My sincere hope is that “Mystery Science Theater 3000” takes this one on, as they’d have so much material to roast. Taking this as is, there are worse low-budget genre offerings, and the consistent lousiness of the screenplay keeps it morbidly entertaining on a so-bad-its-amusing level.

On the other hand, if you’re looking for a Hawaii-set horror howler, even the Syfy shot-on-Kauai “Piranhaconda” has this beat.

One and a Half Stars

The post ‘The Resort’ Has Only One Redeeming Feature appeared first on Hollywood in Toto.

‘Woman in the Window’ Lives Down to All That Bad Buzz

Anemic ‘Spiral’ Should Kill ‘Saw’ Franchise Once and for All