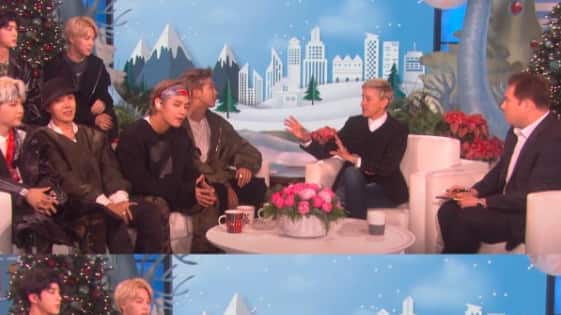 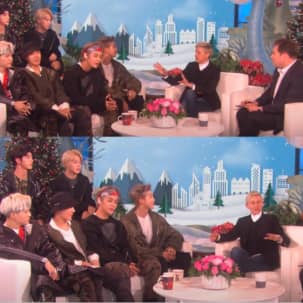 Korean boy band BTS are the kings of the pop world. They are the most successful Asian group ever. Though the group does not speak English except RM/ Kim Nam-Joon, they know how to react. When the Korean band went to Ellen DeGeneres show for the first time, they had a Korean translator with them. Ellen DeGeneres asked them a number of questions and the last couple were quite funny. When she asked RM if they girlfriends, the boys said they had hundreds of them referring to the fan girls of the ARMY. Later, she asked him if they had ever hooked-up with a fan girl. Kim Nam-Joon started laughing and shyly looked away. Check out the video below… Also Read – BTS’ RM gives leadership advice to ENHYPEN’s chief, Jungwon, again proving why he’s the best

Ellen also teases them by telling the translator to explain what hook-up means to the boy. V is the first to say that we have never done something of that sort. In between, rumours of them dating fan girls gained momentum and people had to clarify everything. We know that things can get out of hand especially when you have a following like BTS. Funnily, BTS had again come on Ellen DeGeneres’ show and RM told her that she was the one who taught them the meaning of hook-up. Also Read – OMG! BTS member Jimin shocks the world with his ultra-thin waist

The group is coming up with a new song, Butter on May 21, 2021. The announcement has broken the Internet. We could see memes being made by butter and margarine firms on the same. BTS was touted as a fave to win the Grammy’s this year for Dynamite but the award went to Ariana Grande. The group has seven extremely talented young men, RM/Kim Nam-Joon, Jeon Jungkook, Kim Taehyung/V, Suga/Yoon-gi, J-Hope, Jimin and Jin. Their songs are all about self love and even address issues like mental health. Dynamite has put them on the world stage like never before. Also Read – Throwback Thursday: When J-Hope, Jimin, Jungkook mimicked RM; Jin broke down while rehearsing for their stage debut

THIS action scene of Michael B. Jordan from the Tom Clancy...

BTS’ Suga REVEALED about their dating life; ARMY would be stunned