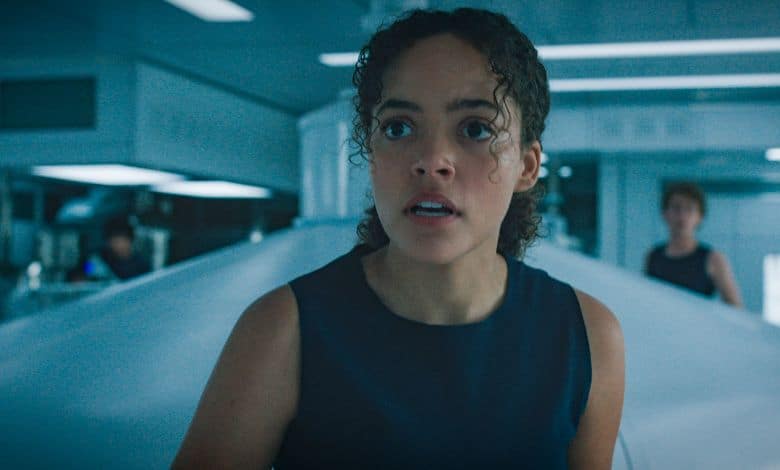 We begin “Voyagers” in 2063, in which Earth is beyond saving and a space expedition is being arranged that will take 86 years to complete.

The other big catch?

The trip to the newly discovered planet will take so long that that young passengers’ offspring will be making human history, not them.

Colin Farrell plays the lone adult/father figure on the ship, who explains with light compassion to his junior astronauts, “Your grandchildren will be on the ones to reach the planet.”

Ten years into the ship’s journey, the lil’ astronauts are now teenagers. Their daily routine of school and ship maintenance is interrupted when a curious crew member decides not to drink the blue liquid in their daily diet. Turns out this blue drink keeps them docile and, by not drinking it, it makes them behave like normal, everyday high schoolers.

The scenario presented aims to suggest that life on the spaceship is a microcosm of life on Earth and the human experience in general. At one point, the protagonist asks, “Why be good? We’re all gonna die in the end, what difference does it make?”

What transpires is so “Lord of the Flies” in space, you wonder if they considered a “Based on the Novel by William Golding” credit. There’s even a “Piggie”-like character, who is intelligent, mocked and meets a terrible end.

This never fully connects with the philosophical and social reflections in the dialog. Considering how the story develops, a better title might have been “Teens In Space!!!”

“Voyagers” is written and directed by Neil Burger, best known for “Limitless” but more importantly, the splendid “The Illusionist.” Burger has a gift for the visual but here, as in a few other of his films (namely his bland “Divergent” entries), the imagery far outshines the limitations of the screenplay.

Burger is too in love with montages of sped up imagery — his smash cuts were fine for “Limitless” but don’t make a lot of sense here.

It’s similar in some ways to the recent “High Life” and “Aniara,” which are both far more bleak, mature and richly philosophical in their explorations of similar material.

The cinematography and especially the sound design are exquisite. All of the actors perform admirably, and the scenario builds interest but not enough to overcome how overly familiar all of this is.

Burger pushes the idea of mankind as the real threat to the universe so firmly, we even get a twist on the famous final confrontation in “Alien.” It’s still not enough to make this, at best, a second-tier sci-fi offering along the lines of “Passengers.”

“Voyagers” wants to be serious-minded, existentialist sci-fi, but comes across like a middle of the road YA novel adaptation.

The trailer and especially the movie poster are overselling the sexuality. Aside from a few moments suggesting the awareness of arousal and displays of inappropriate touching, this very-lightly suggests the unsheathed libidos of the crew. It begs the question: why is a sci-fi film for grownups, about an intergalactic sexual awakening, rated PG-13?

Leads Tye Sheridan and Lily-Rose Depp are affecting as the enlightened teens who are the strongest at avoiding the dangers of their unleashed desires.

Farrell is, by far, the most likable figure in this and even his relaxed American accent works; he’s been unfairly accused of not trying hard enough to conceal his Irish accent in the past, but that’s not an issue here. “Voyagers” boasts a diverse cast, but the supporting characters are barely developed, and everyone speaks English.

Apparently, exploring this new world is a strictly American excursion.

It’s not a bad movie but every promising angle comes up short — even the wondrous final scene poses a problem, as it presents the point where this while story should have started in the first place. Burger aims for an A movie and winds up a respectable C+, which makes for a good try but it’s not enough to stand out amongst other notable works in this genre.

‘Color of Money’ Let Scorsese Go Hollywood … On His Terms

Why ‘Wolfen’ Stands Apart from Other ’80s Horror Classics

‘Sound of Metal’ Gets One Critical Elemental Exactly Right